What is ‘Gandhi’ activism? Gandhi, as many people will know, was a leading campaigner for the independence of India from British colonial rule in the 20th century. He was also a devout Hindu and strong champion of NVDA or peaceful civil disobedience, to such an extent that he once said;

“Non-violence is the greatest force at the disposal of mankind. It is mightier than the mightiest weapon of destruction devised by the ingenuity of man.” Gandhi.

Recently XR has become a well known organisation, utilising NVDA to fight what they’ve called “the climate and ecological emergency”. Few can now doubt that our planet Earth is in trouble. Extremes of weather, wildfires across Australia and the number of species on the endangered list make that clear. The COVID19 epidemic has now also shown that people will be affected by ecological breakdown. XR has also been dubbed the #1 top organisation for raising climate awareness.

I, myself, have been involved with XR since last June. I’ve been involved in various projects; XR rise up galleries, commenting on the disability working group document, expressing support on Facebook during the strikes, signing petitions, ‘paint the streets’, writing to my local candidates during the general election in support of XR’s three demands bill, creating rituals. I’ve also recently became involved with my local XR group. I’m an admin for their Facebook page, have supported their protests to protect local ancient oaks from housing development and taken part in a celebratory first anniversary of the April rebellion event.

The weekend before last I took part in what felt like my first group event with them though I still took part virtually. The protest was part of a nationwide action, dubbed ‘Change is now, decide together‘, calling on the government to divest from uncritical bailouts of fossil fuel companies and banks and create a binding citizens assembly to ensure citizen participation in their recovery plans from the COVID19 epidemic. A larger action was held in my nearest town but it remained within government social distancing rules with participants remaining two metres away from each other in hexagonal squares. All participants also wore their own gloves, mostly outdoor or rubber gloves, and face masks, handmade from old sheets by a local member.

One of the main aims at the heart of XR is the ‘Three demands bill’. The three demands are:

1.Government must tell the truth by declaring a climate and ecological emergency, working with other institutions to communicate the urgency for change.

3. Government must create and be led by the decisions of a Citizens’ Assembly on climate and ecological justice.

When I wrote to my local candidates during the 2019 general election the demand the candidates appeared to be most sceptical about was the second. Both the Conservative and the Green Party candidates commented on the difficulty to reach net zero gas emissions by 2025 due to the immediate greenhouse gas emissions that would be created by the installation of renewables. My personal argument would be, okay, maybe 2025 is a little ambitious but giving us a shorter time scale would give us more of an impetus to act quicker. To quote from someone else,

“If the American president, John F Kennedy, had said we would get to the moon as soon as possible we probably still wouldn’t have been there. However, by saying that we were getting to the moon within a decade, it’s now fifty years since the moon landings.”

Another interesting point the candidates made was that they didn’t feel the general public were yet at a stage where they were ready to embrace the challenges and sacrifices a net zero society would entail – basically they were afraid of losing public support if they agreed to such a radical demand. This brings us to the last of the three demands – the citizens assembly. This might also be seen as a radical demand but personally I’m in favour of a certain degree of direct democracy so long as it goes closely in hand with greater deliberative democracy – especially when those in parliament are too scared to react to the current emergency due to loss of public support.

A citizens assembly in particular would be a good form of direct democracy as it encourages deliberation amongst participants and presentations by a variety of experts – some of these experts might not normally have a greater say in politics than the average person. It removes the knee jerk reaction factor of direct democratic tools such as referendums and opinion polls, by greater deliberation. I’ve read about the suggestion of electing a parliamentary representative by ‘proxy for nature’ but, how do we know such a representative would not be swayed by a fear of lack of public support too? Besides which, who’s to say the public aren’t more enlightened than we give them credit for? If public opposition to government initiatives such as badger culling and HS2 are anything to go by, it could be argued that the public are more enlightened than the politicians!

I’ve occasionally heard people say it’s down to the individual to act on the environmental emergency and we shouldn’t rely on our governments to shoulder the burden like some kind of parent. The truth, however, is that we need action on both levels. It’s not an either/or situation here. There’s plenty the individual can and should do to prevent climate change and ecological disaster. We also need a empowering democracy to support us in doing that though.

Gandhi’s Hindu faith was a huge source of inspiration for him throughout his life especially in his politics. He believed passionately in the ancient Hindu principle of Ahimsa, who’s basic concept is non-violence towards all living beings. He also believed passionately in the universal principle of Truth. He used his beliefs in both to great effect in his campaigns to liberate India from the colonial British empire and reestablish it as a peaceful, independent nation. He once said of nonviolence in relation to religion,

“Nonviolence is an active force of the highest order. It is soul force or the power of Godhead within us. Imperfect man cannot grasp the whole of that Essence-he would not be able to bear its full blaze, but even an infinitesimal fraction of it, when it becomes active within us, can work wonders.”

Gandhi believed in the equality of all religions, that this active force was at play in all religions, but he also appreciated that everyone has their own perception of their religion. He once commented,

“In reality there are as many religions as there are individuals”.

This is probably even more true of paganism, lacking as it does any kind of bible or authoritative teachings, and many pagans, including myself, would likely say it’s all the better for it.

For myself, nature and the environment is at the very heart of my pagan faith. I would go beyond saying that I see the divine in nature, to the even greater claim that I believe nature is manifestation of the divine. Therefore to see it being destroyed is to see the divine being destroyed. Campaigning for environmental justice is one of the most vital elements of my pagan practice. I’ve been campaigning on environmental issues for thirteen years, originally with the RSPCA and the Wildlife Trusts, long before I came across paganism.

A video was created of the Lent vigil https://youtu.be/NFeq66d8iks

Although I respect we all have our own differing beliefs and practices as pagans, a belief in the divine in nature is a fairly common aspect. Therefore I’m calling out to my fellow pagans, during this critical time in humanity’s history, to harness your own soul force and join me in nonviolent action to create a more empowering and balanced world. For, to quote Gandhi one last time,

“A religion that takes no account of practical affairs and does not help to solve them is no religion.”

To find out more about Extinction rebellion visit https://rebellion.earth/

To find out more about Gandhi’s views on nonviolence visit https://www.mkgandhi.org/nonviolence/g_views.htm 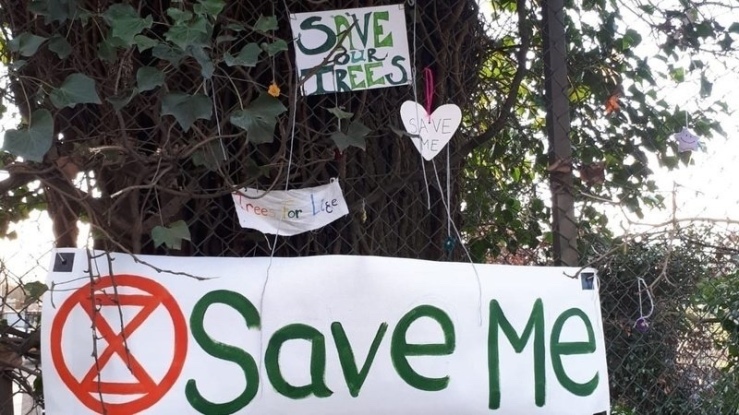 Please sign our local XR group’s petition to save local ancient oaks from planning development! One of the ancient oaks is 400 years old! Such ancient trees are a mini ecosystem in their own right, capable of having 2000 different species living on them! Destroying just one of them would be the equivalent of destroying an entire nature reserve! It’s even been discovered that bats are roosting in them. Cutting down these trees at this time of the sixth mass extinction would be an enormous tragedy. Thank you in advance! https://www.change.org/p/persimmon-homes-save-thurston-s-precious-trees

1 thought on “XR and Gandhi activism”